From Gray-on-the- Saône we sailed back to Dole, because we would be meeting family there. As we waited for them we spent a lovely week there, beneath a monumental church, so no complaints about the view.
While we were there a whole day long there was a triatlon for different categories, small and big.
A lot happened, on one site of the boat they swam past on the other site they came by bike or running

During the summer we are roaming, but part of a small community of people who live likewise.
Part of the fun is that you never know if and whom you’ll run into around the bend. Sometimes it’s a really big surprise; in Dole we moored for a few days next to friends of ours who were there already with their ship Dagens II. So we keep friendships alive.
On their boat I learned to felt, something I had wonted to do for a long time. The neighbour sent me home with a bag full material to go on, a winter activity I look forward to.
We had about 100 K ahead on the river Saône and after that some 219 K of canal, including 62 locks (up) and 47 (down); in other words crossing a mountain.
Our problem now was not so much getting in a time squeeze, but we ran the risk  of a closure of the canal. We had received some information about an imminent closure – it was already closed for ships with a water draught over 1,2M –  and we wanted to be in that canal before that. We figured ‘they’ would not close it on us, so once we were in we could get through (turning is not a good option, given our length).
On arrival they didn’t even ask after our depth and everything seemed okay. Not really so, as we were bothered by low water levels. When cruising we had to stick to the centre line – sufficient depth – and mooring was most of the time out of the question as we couldn’t get to the shore. Only a limited amount of proper moorings were available.
The day after we got out of the canal they closed it down, we were the last big ship to have gone over the top, the summit was closed now in both directions.

There was though one advantage. As from the start of our itinerary we knew that here we had to navigate our lowest passage where we could pass, but there was no margin, so we hoped for no foul-ups.

On the Saône there were a few locks with a kind of rear view mirror, placed there for the benefit of the lock keepers, in the olden days. It gives you a nice pic of your own boat in a lock which we rarely see as we are always on board.

Just like the other photo that I could make from the lock doors because the distance between locks there is so small that I could walk ahead. Here you can see the water swirling round the ship as the lock is filled. Sometimes so forceful that the ship rocks against the walls.
In this canal there is a tunnel with an entrance so narrow and curvy, it is just knowing that the so much bigger peniches have passed before us that gives us the courage to go forward. It always looks narrower and smaller than it really is.
In the olden days this canal was used by cargo carrying peniches, but they are gone; now it’s just pleasure craft.
The disappearance of commercial shipping from the smaller canals of course has its repercussions for the villages along the canals. The dilapidated buildings carry witness. 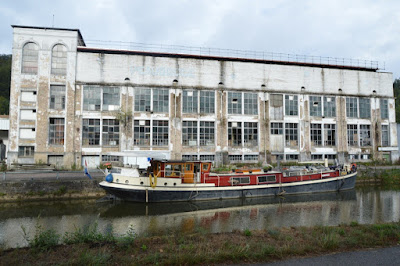 Although it is a sad thought and a bleak view, some buildings are beautiful, even when decayed.
In the Netherlands a dilapidated factory would have been demolished but here – luckily – it is allowed to stay.
Meanwhile September had begun, the days had shortened, evenings were chilly.
We heard and saw more trees being cut and the wood piles were built up.
Preparations for winter that were not foremost in our mind. We had just left the ‘canicule’ (heat wave) behind us.
Along the way we meet all kinds of boats, some of which really stick out, where the owners have done their best to build a one-of-a-kind, sometimes very ingeniously like this one.
An old ferry where the owners roll on their caravan and go cruising, home-aboard. When they are done cruising they go and pick up their car and hitch the caravan, thus mixing cruising and driving.
Panache had developed a curious habit this summer, we haven’t a clue as to why (heat stroke?) or how but he became so obsessed that it became worrying.
Both during cruising and when moored he stood like a statue, just over the exhaust, staring at the water and he wouldn’t budge. Even when walking ashore he returned like a shot, when given the chance, to stand there. In the end we blocked that particular spot so at least he was not hanging over the fumes. It is better now, but still peculiar.
After the Canal des Vosges we went via Toul to the Canal de Meuse, the first leg of the Meuse river.
Here the low water levels still bothered us, but less and less and it was over as we finally entered the river proper.
We still were cruising a part of France we didn’t know, so we came to new – to us, that is – towns like Sedan and Verdun. Sedan houses the biggest castle of Europe, very imposing.
We had already heard many stories about Verdun, as WWI had a huge impact on this region and left its mark. The memories are still very much visible.
We made a tour on our scooter of these monuments and found it very impressive. 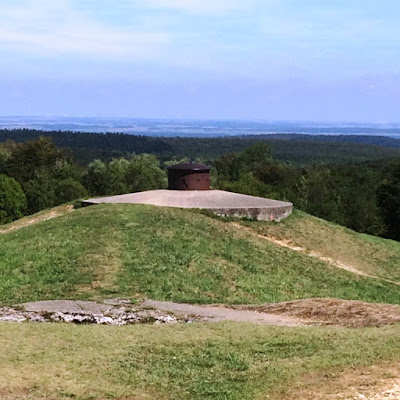 Goose pimples when you’re standing next to the domes, where they housed the cannon, looking at the beautiful sloping hills. First we had been underneath this dome where it was visible how the soldiers had their bivouac there, how senseless parties fought each other and how bomb shelled and desolate the landscape had looked then.
Although we had been bothered by low water levels, there’s been many a period when the levels were so high that the consequences have been dire.
On a lock on the Meuse they visualised how high up the levels have been in the past; looking at it you can imagine the problems that were caused for the area.
We had planned to stop for a few days in Fumay, just short of the French-Belgium border. Here we were back on known territory and we knew there is a nice quay where you can do a bit of work. And you can shop, last stop in France, and use up the French internet data.
On arrival it turned out we were not the only ones that had had these thoughts and we found a few bigger boats there, all people we knew.
It looked like an impromptu rally and this is what it looked like.
As we had done this stretch of the Meuse before, the view was not so much a surprise any more, but cruising underneath these huge slabs of rock is still very imposing, quite a change from the scenery we had seen previous months.

We were surprised, though, when we found that the sunken ship in the Meuse was still there, as it was a few years ago; do they imagine it to be a tourist sight?

Just south of Dinant you sail underneath the Charlemagne highway; spotting a busy carriageway up there makes you aware that cruising is done in a different world.
During  a short stay in Namur our grandson came to visit us with his parents, a real joy to see him (well, all three actually 🙂) after so many months. 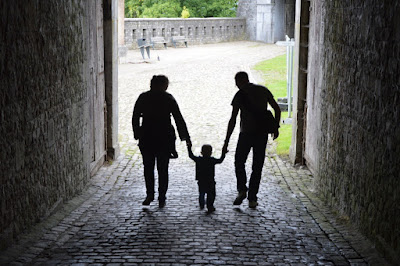 Just before the Belgian-Dutch border we were boarded by the Belgian police to check our paperwork and such. They do that regularly, we had been told by fellow skippers, but we had not ever been checked in the previous years, which surprised even these coppers.
They had been following us for a while when they raised us on VHF telling us to take them aboard, so surely they must have noticed Michel at the wheel. As he had to get the necessary documents I took over the helm, we could just continue during the check. Part of that was me having to blow a breath analyzer as I was at the helm, it showed I was sober at eleven am, but they will never know if Michel would have been over the limits 🙂, weird.
I kind of liked it as I had never done such a test before.
We spent a few days in Maastricht, because of being late in the season and the bad weather there was plenty of room on the quay (mostly it is crowded) just as la Tulipe had, so it turned out to be a social visit as well.
But then we had to move on as we still had some special activities ahead before we could moor in Amersfoort.
First we had guests on board in Den Bosch, Australian friends on their way from their boat to the next summer down-under, before they return again for our summer.
And then we were off to Meerkerk for a rally.
Meerkerk at Anchor, organised by our friends from Shell V. A rally with 8 boats and 17 people in all.
The weather was gorgeous and we spent three very nice days with old friends and made a few new ones. Having dinner together, going for a walk together, a real Jeu de Boules competition on the track in front of the local super.
And on again, at a steady pace to Amsterdam for a very special event.
On October 5th my oldest brother got married there and, after the wedding ceremony, we made a trip through Amsterdam; all went well and everybody enjoyed it.
Our bonus was steering ‘t Majeur right through Amsterdam, mooring in front of the Carré theatre which was a first. 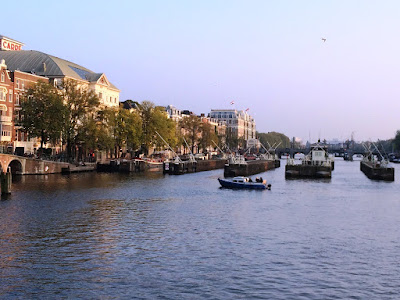 We had a fantastic cruising season and have been able to enjoy it without problems.
We enjoyed the well known tracks and lots of new ones, the social gatherings, both planned and spontaneous, and we had perfect weather.
On the chart below you can check all of the itinerary
Below is a graph indicating levels where you can see we did some heights.
The top was in the Canal de Vosges (390 meters over the Amersfoort level), and after that a quick descent on the Meuse to Dutch levels.
Now we are back in Amersfoort and are moored on the old spot for a few months ahead.
We like it this way and look forward to all activities linked to this period, not least the time we will spend with this happy little chap and we’re looking forward to meeting our second grandchild in February. 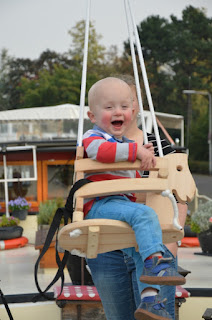 Meanwhile no cruising and no blog, but I now already know that the March itch will come and we will leave here in April; and also next season I’ll try to write a blog.
For now, greetings to all my readers, hope to meet next year.