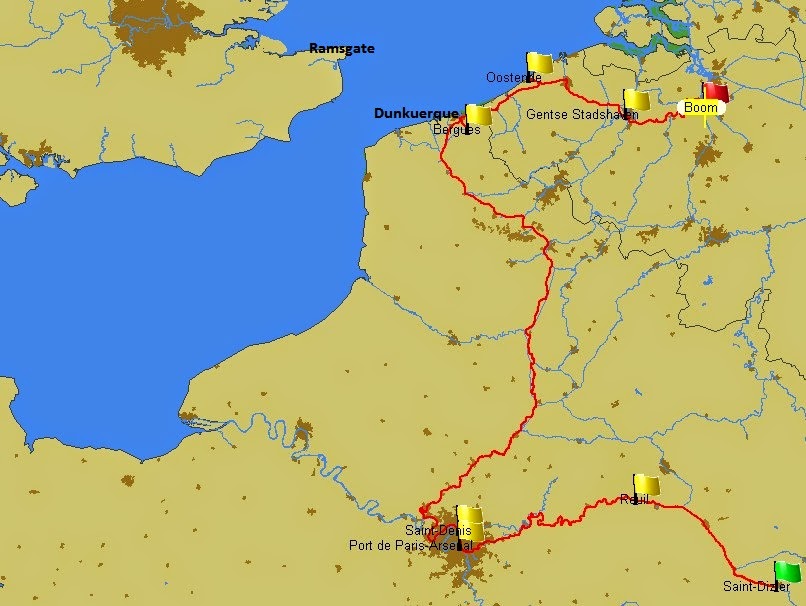 All my intentions to write more frequent and shorter blogs have come to nothing. Life on board is just too busy and the blog …. But when finally I put myself to the task it turns out to be lengthy. I do hope it’s still fun to read, but poor Michel has a lot of text to translate.
After  spending a long day on the Scheldt river, mistiming the tide and the distance, we were forced to moor for the night on the river instead of mooring behind lock Merelbeke (Ghent).
It was late and it got dark so we moored on a pontoon that was a bit too flimsy for our barge. The chairman of the club, that owned the pontoon, had been alarmed by the neighbours. We could show him that we had ropes directly on the quay in order not to damage the pontoon, we shared a beer and he let us stay for the night. We now have firmly resolved not ever to cruise the Scheldt between Antwerp and Ghent in one day.  It is a beautiful stretch and you have to enjoy it.
So next day we arrived in Ghent where we found a nice mooring for us, we were still together with our friends from Shell V, in town centre on the Lindelei.
And Ghent is a lovely town, perfectly suited for a few days shopping, nice food and a visit to the hair dresser.
From Ghent to Ostend was not very far and we arrived ahead of the crowd so we had a perfect position to see them all come in.
In no time at all the whole of the harbour was filled with very big and very small boats, everybody geared for an few days of festivities.

The weather did its utmost and we quite enjoyed meeting old friends and acquaintances and making new ones.

This year’s theme for Ostend at Anchor was the liberation of Ostend 70 years ago. Some twenty “little Dunkirk” ships had crossed from England. These were ships that had actually partaken in operation “Dynamo” in 1940.

The British admiralty managed to evacuate during May-June 1940 some 338.000 British, French and Belgian troops sending out an armada of more than 700 privately owned ships. Only those ships managed to come close to the beaches at Panne and Dunkirk.
These at least 70 years old ships are lovingly maintained by volunteers who still cruise them.
Guest of honour was Lord Mountbatten’s son.
After Ostend Michel sailed, together with Shell V, to Veurne while Rebecca went back to Amsterdam, using the occasion to also buy a new gauge for the freshwater tanks.
Once back in Veurne installing it  proved to be a bit cumbersome. Michel couldn’t get his hands in the allotted space so Rebecca had a go. She did well until force had to be applied and then more space was needed.
Brute force was called for and out came the flex. After some hesitation Michel decided to cut out part of a rib. Exciting, covers everywhere to catch the fireworks with an eye to catching fire. It worked out quite well and the gauge could be installed. Another job well done!
Only ……. The gauge doesn’t work so we cruise without one, calculate our use of water and we’re doing fine J.
Meanwhile the neighbours had already left and we took off on our own for Paris where we would meet again. 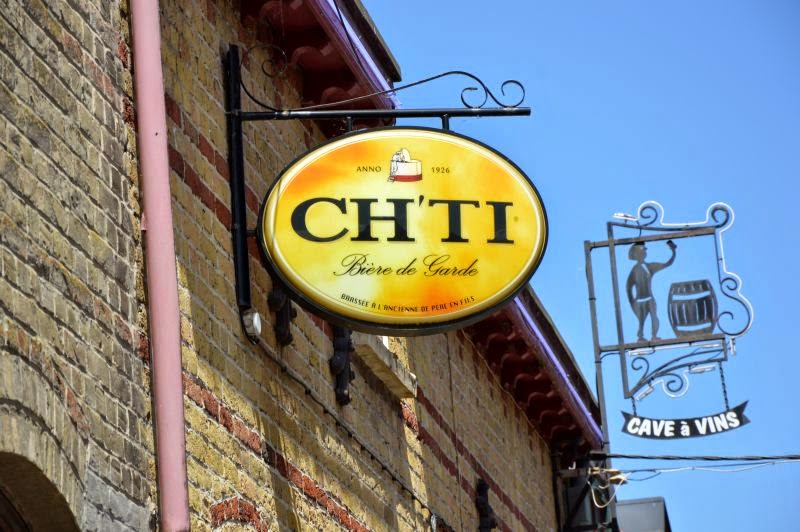 We dearly wanted to visit Bergues, we hadn’t been there before and we enjoyed watching the movie “Bienvenue chez les Ch’ti” that has been shot in and plays in Bergues. For those of you who don’t know that movie: go see it!

As soon as Bergues and the walls of the ramparts came into view I recognized it and realised that we had been there before, driving our car instead. Apparently so different that I couldn’t remember it when we planned the trip on the canals. A nice little town and a beautiful mooring.
After that we had to do the bigger waterways, sharing them with the commercials going South. It’s good to find that commercial transport is on the up, the skippers are finding more work and we don’t mind sharing the waterways.
Unfortunately the situation then is such that straight away there’s a big pile up when, on one of the busiest waterways, the Canal du Nord, a lock is out of order. That takes hours, if not days waiting but that’s everyone problem so ours as well.

We managed to get the scooter on shore and for the first time we had the possibility to visit a wider area. Michel drives, I’m in the buddy seat and I really have to set  myself to drive.

After the Canal du Nord we took to the Oise, a bit more to the South. It’s a river but no strong current and yet it is different, both landscape and surroundings.

During our stint on the Oise we saw each night a huge Zeppelin cruising overhead, stately and slowly. These are the real airships.

And then, where the Oise ends you turn left onto the Seine, almost in Paris.
The Seine also is a busy river and the commercials here are a lot bigger than on the Canal du Nord and the Oise. Here you see ships that have come from le Havre. No problem as long as everybody sticks to the – very clear – rules. But things can get exciting when one of the big boys, empty, and way over the speed limit, is racing past not only us – we’re small fish – but also a big, fully loaded, colleague.

We took the Canal St. Denis into Paris and we moored in the Basin de la Villette. Exactly where we moored last year, it felt a bit like coming home. Another Dutch barge was already moored there and next day Shell V arrived, so lots of merriment and social traffic. 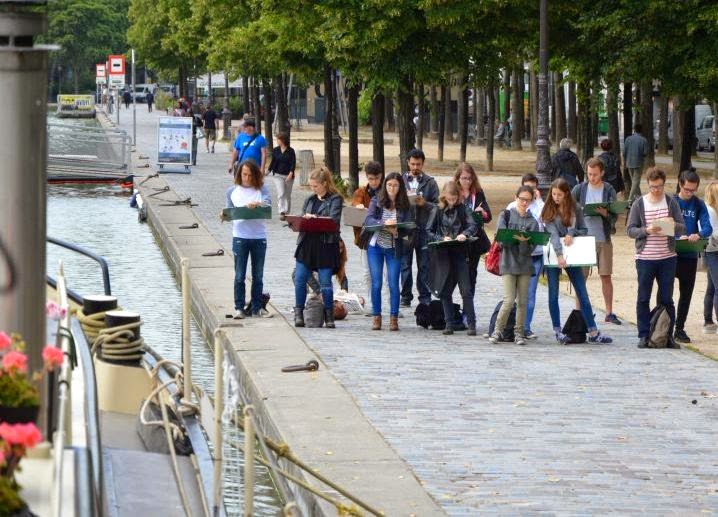 And although the Parisians are used to quiet a lot, ‘t Majeur each time pulls many spectators, here even a full class, instructed by their teacher to draw the ship.
Spectators not only for the ship, Panache gets his share as well and he knows quite well to position himself on the aft deck in order to get as many Oooh’s and Aaah’s from the passers-by. Lots of pictures are taken and he seems to enjoy it. 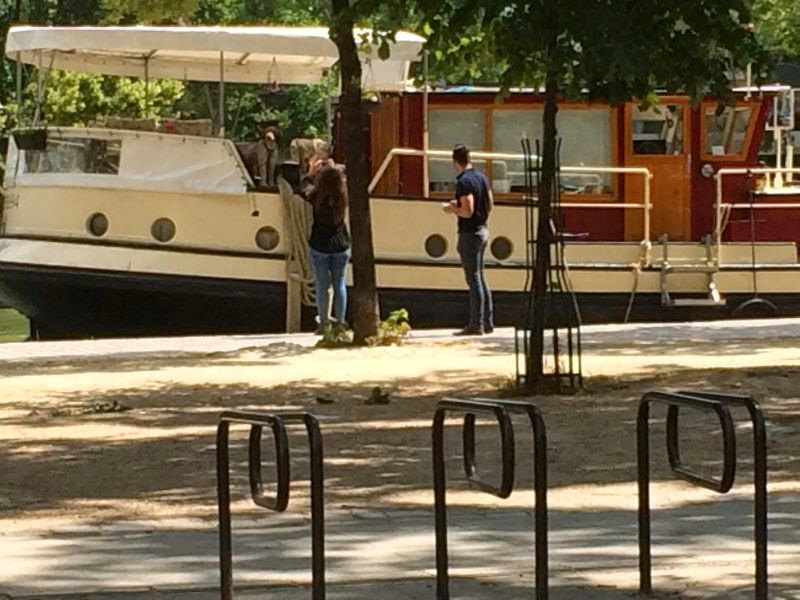 Unfortunately one of the bikes got stolen in the first night. We thought everything was secured and out of sight but still …

The advantage now is that Rebecca rides a brand new bike, even more comfy; the distinct disadvantage is that our care free attitude has been severely dented. That is the worst, and it will surely get better although we aim to stay more alert.

We frequently and with great fun used our scooter, the perfect means of transport for Paris. Not just for the two of us but also with Panache in the crate to drive him to a park where he could run free.

Let it be well understood: Panache loves driving in the crate, just as he loves cruising in the dinghy.

We unfortunately already noticed in the Canal St. Denis that the bow thruster had been clogged and didn’t work properly. When in the Bassin de la Villette it was completely out of order.
Our son in law used the dinghy to give it a good try to get to the prop, but to no avail.
And even the diver, who happened to be working in the Bassin and who very kindly helped us couldn’t get all the rubbish out of the props. Part of it only – some synthetic textile – but the remainder is so tight around the props that we have to be lifted. And by now the bow thruster sounds completely blocked.

Not only was our son in law visiting us in Paris, but also our daughter and grandchild Nathan.

Panache adores Nathan and from the moment he got on board Panache took it on himself to guard and protect the puppy.
As we thought Panache accepts a lot from Nathan, even piggy back riding and we expect Nathan to be able to freely pull his ears and tail.
All around the Basin de la Villette there is a daily crowd picnicking, making music and playing games.
We joined them playing Mölkky, a game we got to know last year in Paris.
People from nearby, who also were playing, came over to ask after the white thing on the crate: did it have anything to do for scoring or such, but no, it is the baby phone.
For Nathan there were lots of things to do and a lot of firsts like cruising in the dinghy with his parents, wearing a life vest
Sitting in the swing, rigged in the crane just for him, he had fun and lots of on lookers.
And then watching his first Wimbledon final on grandpa’s lap; Michel says you just cannot start too early to learn that tennis in general and Wimbledon in particular are important.
And then the stay in Paris was over and we continued along the Marne river. No bow thruster, as it appears impossible to have it repaired in France. In the area where we’re cruising there are but a few yards that can handle ships of our size and those who can were booked full.
We have now decided to change our itinerary and go slowly back to Belgium where we will manage to get in a dock in Antwerp or Namur.

On the 14th of July the locks don’t work in France, it’s a public holiday, so we planned to moor on a nice spot on the Marne for that day. And because there was a ship moored on the pontoon already we could only use part of it and the fore ship was moored in the trees, having a line over to the quay. A bit nasty to moor with a bow thruster, a real bitch without one. But no problem, we did well.

And when we were properly moored we were informed that the fireworks were to be lit just there so we had to be away for half an hour at 23 hundred hours.

Getting off the pontoon was the least of the problem, but hovering in the dark of a current and then to moor again on that awkward spot, no bow thruster, was a real challenge. It wasn’t the first and definitely the last test on manoeuvring without it, but things are getting better and we, especially Michel, is getting the hang of it.

Next day there was a big feast in the village, Reuil, with a lunch for everyone for which they roasted a pig and a lam. As part of the automatic spit had broken down and as from 5 o’clock some has been turning it by hand. There were games and especially lots of wine and champagne. A perfect day and at the end they thanked us that we had joined them!
Meanwhile we have arrived in Saint Dizier, which is our turning point.
Gotten wise and experienced in Paris we now, certainly in the cities, moor away from the quay. Using our spud poles that can be done easily in the canals. We bring out the gangway and at night we close the castle by raising the bridge and we can sleep peacefully.

We amble along direction Belgium, next time more about finding a dock.

434 Comments on “Ghent to Saint Dizier via Ostend and Paris”