As I pointed out in the first blog this was, barging wise, not our most interesting year. Yet, we have been very busy, which I certainly noticed when going through this year pictures.

Because I do not only write this blog for those who follow it but certainly as a memento for ourselves, here is another overview with lots of pics.

Starting at Meerkerk we first cruised to Den Bosch and spent a few pleasant days there, as usual. Now that commercial traffic has been banned from traversing through Den Bosch there is lots of space south of the city at Lock 0 (no mistake).

Our plan was to go west through the Belgian Kempen, but at the last moment we decided to turn west at an earlier opportunity. We cruised along the Wilhelmina Canal, where we had not been yet, and we have relatives living in Lieshout, so two valid reasons.
We’re talking the end of April, and a sporadic nice day aside, the weather was bleak and cold. Nature reflected this, but also provided nice pictures.
We even had a hailstorm, covering the entire ship like with snow which stayed a while because of the cold.

Small signs of an upcoming spring could be noticed and in May temperatures went up so we could enjoy the villages and towns along the Wilhelmina Canal and the Jazz festival in Breda.

We even went to Oudenbosch, a pretty little village situated at the end of a two kilometre (narrow and blind) branch of the Wilhelmina Canal. The entrance was so narrow that we had to ring the harbour master to check if there would be room for us and if we could make a U-turn. Both questions were met with positive answers, no problems, good as the alternative would be backing out through that very same canal for again two kilometres.

The mooring turned out to be pleasant but we could just fit in because the only other passer-by was so kind as to move back. But no way we could turn around. First we enjoyed the surroundings and after two days we had to back out and there Michel was able – going back and forth a few times, helped by empty moorings in the marina – to turn around. Now, there’s a harbour master for you! It was nice having been there but not again.

Then we were on the wide and open cruising to Antwerp, bunkering gasoil and into the marina. We were lucky that the MAS, the Museum at the Scheldt river, had it’s fifth anniversary, celebrating it with a festival in and around the museum. The marina is situated right next to the museum so we had ring seats watching the fireworks. 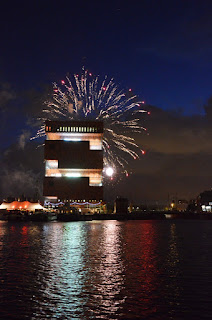 From Antwerp onto Ghent where we had arranged a mini rally with fellow bargees. It provided a nice picture of nice looking boats on the Leie river and lots of fun as well.
We then left Ghent in keel line, joined by several other boats all en route for Oostend for the Oostend-at-Anchor festival.

It is a yearly event and for us it was the third time we attended, once every two years. Each time a very pleasant experience.

The festival was favoured with nice weather but on the day we were leaving the weather was bleak, cold and a stormy wind. After the first lock, onto open water, then passing through a lock entering a huge basin closed of at the other end by a bridge. And there we had to stay, not permitted through the bridge because a WWII bomb had been found that had to be dismantled first. Problem was that there were no proper moorings and as the quay sides were very high up we had problems getting of the ship.
For two days we had very little idea of what was going on. Sirens and police cars was what we noticed. After two days we were informed that the bridge would open just once and that we – there was six of us by that time – had to go through in closed keel line, passing through the next three bridges as well.

We expected to enter into a war zone, nothing of the kind! As soon as we could see the surroundings we found people shopping, walking and biking and life seemed to have continued as usual. We never heard what exactly had been the matter.

We, that is ‘t Majeur and our friends from Linquenda, arrived at the Merelbeke locks where we spent the night, moored next to the big boys. Next day we entered the Scheldt river with favourable tide. It was only when we were already in the lock that the lock master told us to be aware of heavy mists on the river, a bit late.
Turning back would be awkward and just after the lock it looked better so we carried on having limited view that got worse, not pleasant but yet another experience.

We then cruised directly to Meerkerk where we could, for a longer period, moor on a spot  that was normally the mooring of friends of ours who were cruising. They also had put their house at our disposal.

It was fun, for once, having a fixed abode in Holland in summer. We had quite a schedule to meet, lots of work was planned and a bit of barging. And, as long as the boat was in Meerkerk we could stay in our friends house.

More or less what did we do:
All woodwork at the pilothouse sanded and lacquered, just regular maintenance.
We could, not living on board, sand and lacquer the floors.

Organising a family party in the garden because of several special birthdays and, very appealing, staying in a house with a garden.
All went according to plan except that last bit because this years month of June was the coldest en wettest since long.

There was just one day we could spent outside entirely and that was the day of the party, pheeeewwww, were we lucky.

From Meerkerk we went up and down to Vreeswijk where we were on the slipway at the Museum-shipyard for the seven-year inspection, a kind of MOT, and for regular maintenance.

One important item was the spud pole that had gotten stuck, the problem that had not been solved in April (see this link:spud pole)
The pole again was removed, but this time on dry land so we could inspect the tube’s inside. NOTHING to be seen and nothing had dropped to the ground whilst removing the pole.

Thorough inspection, lots of discussion, everyone had an opinion (all different), so more inspection and discussion. Conclusion: the pole must be a very tiny bit slightly bent but not so that it gets stuck. So, what is the matter? Then, someone had a brilliant idea; fixed on the pole are nylon buttons that prevent the pole from rattling. So if we plane them ever so slightly than – maybe! – this fixes the problem. BINGO, problem solved.
Back to Meerkerk.

After our stay in Meerkerk we, once again, moved to Vreeswijk, host to a rally of the LVBHB (Society for the Preservation of Historical Barges). 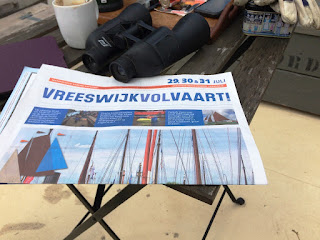 Some two hundred barges were moored on the quays of the Merwede canal and in the historical harbour and there was a 3 day festival. The closure was a 50 ship parade through the Koninginne lock followed by a naval review on the river Lek, watched by viewers on the dike.
Meanwhile we had decided that we would rather do a bit more of maintenance instead of cruising Holland (no fun in high summer). We had arranged for a prolonged stay in Vreeswijk. By now the weather turned into summer and we had a bit of a holiday feeling.
This gave us plenty of time and we didn’t have to work long days, so we mixed the work with nicer things like visiting friends on their barge in Belgium and barging a while with them and making nice daytrips.
And  then back to hard work in order to
So we could after that
Which was followed by
This is by far not a complete list of all we did and there is much more to be done. But we renewed our certificate, the barge looks spic and span and we are satisfied.
I said this was the last time I painted the hull but Michel says he might do it again, w’ll see.

And of course the advantage to being in Holland, rather centrally placed, was meeting with friends and relatives and, not least, being visited by the grandchildren
And then we decided enough is enough, we had not done all chores (there is always plenty left) but for now it was OK.

We still had some time to spare so we cruised a round over the Hollandse IJssel and back over the river Lek to Vreeswijk.
We had cruised the IJssel in 2010, still remembering it fondly. We remembered correctly, it was fairly narrow requiring lots of manoeuvring, not for us in high season with too many pleasure craft about, but fine in September.

Finally, by the river Vecht, back to our wintermooring in the Eemhaven Amersfoort.
We picked up our winter activities and enjoy winters life to the full.
For instance, taking the car to the Moselle river in Germany, as we have still not been there by boat. We really enjoyed the beautiful colours of autumn and some very special castles.
We are now preparing for next seasons trip, buying maps, planning the route and reading books. What we had in mind is actually going to happen: going to Germany, especially the lakes around Berlin and Berlin itself.

More on this subject in next years blogs, when I can report on a region that is new territory to us.

For now, I wish all my followers a happy New Year and see you then! 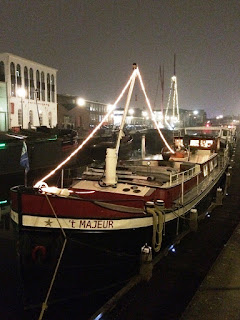 4,204 Comments on “Meerkerk-Amersfoort,via via via”