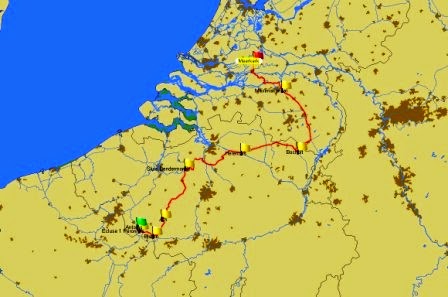 Due to the persistent gale, which caused cruising to be out of the question, we stayed in Meerkerk for a week.
One day the winds were so strong that the bridges weren’t operated, queuing commercials not withstanding. 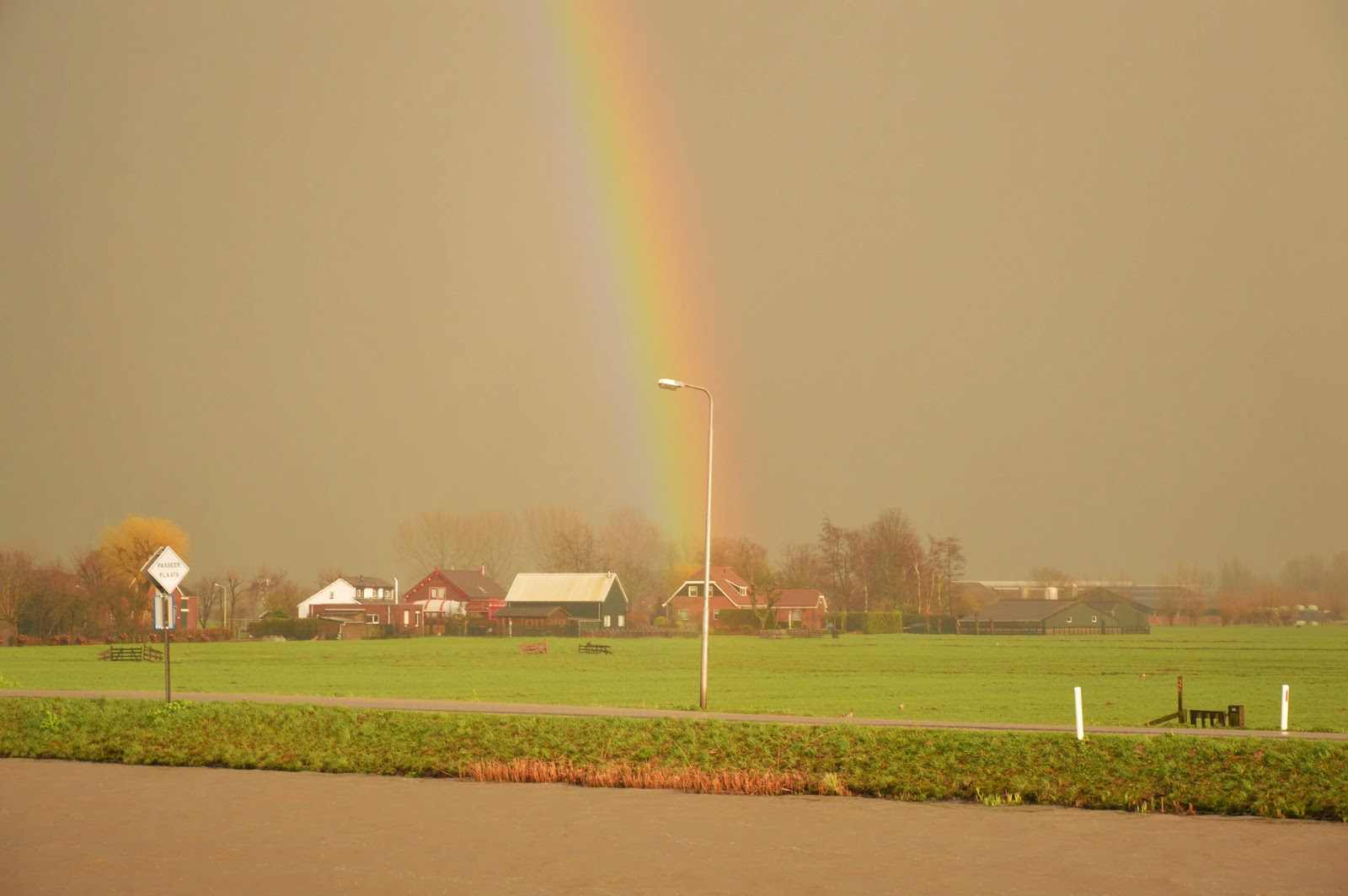 The light is strange, which brings out a beautiful rainbow 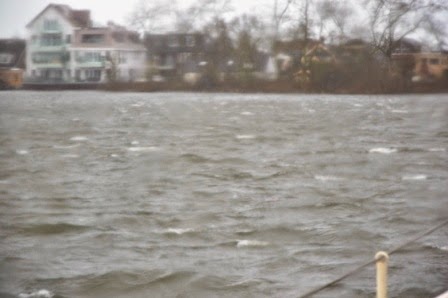 Crested waves in the Merwede canal at Meerkerk 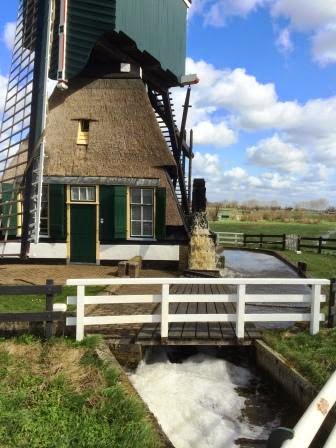 Our neighbour, a windmill that drives a water wheel, was doing overtime these days
On leaving Amersfoort we had planned to go back to Holland for a few days, starting April 24th.
In order to do that we have to leave our ship in a save place and we knew just the spot; Antoing in the south of Belgium near Tournai.
Our planning said we would have a 13 day margin, provided we would cruise from 9 to 3 on the other days;  a quiet pace with enough margin to spend a few days moored once in a while.
Now, we’re used to a planning being just that and in real life things are different. This time was no exception.
Before leaving Meerkerk we had gained two days by doing the trip in one day, but we were set back by two days because of the batteries and six because of the bad weather. So, we still had a nice margin but less than we wanted for trips in Belgium.
Last year, on our way back, we sailed right through Den Bosch, which is a nice route for us. It’s not for commercials, too narrow and thus time-consuming and a strain on the town.
March, 2015 saw the opening of the Máxima canal that bypasses Den Bosch for the bigger ships.
We hadn’t realised that that meant no more Den Bosch for us too.
The new canal is not as nice, quite boring in fact; it’s 9 kilometres and counts 8 bridges, must have cost a fortune. 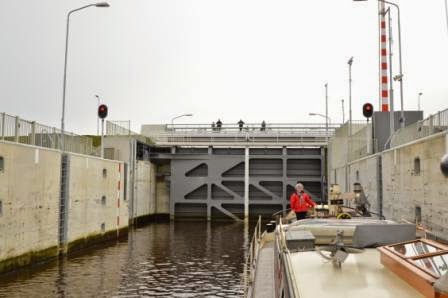 Máxima canal
We left Den Bosch on Easter day, to find our way to Belgium via the Zuid Willems canal; it would normally take two days because of all the locks but this day we could carry on and all locks were readied for us. The lock keepers were glad for something to do and all day we didn’t view a cruising ship; all moored because of Easter.
The one day gain was lost again next day because, something we had not foreseen, in Belgium everything is closed, and that not only on first but second Easter day as well. So the locks were closed and we had to wait in front of the first Belgium lock.
Just before that we had crossed the border, really not conspicuous if it weren’t for the noticeable difference in maintenance of the water ways and its sides. 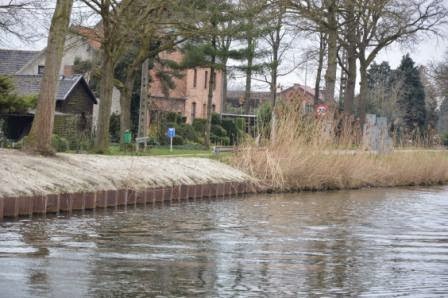 Where Holland becomes Belgium is quite noticeable
After the Bocholt-Herenthals canal we had to cross Antwerp harbour and go by the Royer lock to cross to the tidal Scheldt river in order to get to the Dender river.
Each time we go on the Scheldt  river it takes quite a bit of figuring to decide when is a good time to do so. You have to take the tide into account, as cruising into the current is a waste of time and gasoil, but the duration of the trip is important as well as the tide changes during the ride. Also we have to take into account the moment that the tide changes and so at what time we can leave; 4 o’clock in the morning or at night in the dark are no options for us.
Each day the change of tide shifts by about half an hour. For us this meant – this time – that we had to do the Scheldt before the weekend instead, like we would have preferred, after the weekend because that would have meant cruising in the dark. 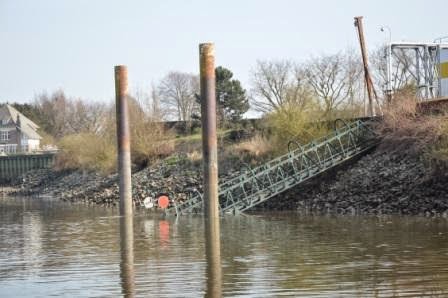 Floating jetty on the Scheldt, meant to go up and down with the tides; doesn’t work all the time apparently
The Northern part of the Dender, a North-South waterway in Belgium, down as far as Aalst is well used by commercials and we could see preparations going on to enlarge the locks and the canalised stretches to facilitate bigger ships.
For us, on the one hand a pity, for it will become less rural and busier, but on the other hand it is good to find, for us too, that navigation increases on these waterways so they will stay open and be well maintained.
Past Aalst it get difficult for bigger ships and we too had to crawl to manage all the bends and the lack of sufficient water under the keel.
Here the Dender and surroundings are lush and green. The locks from Aalst to Blaton – the most Southern point – are hand operated. Both in Belgium and in France this is being done less and less and most locks are (partly) automated. 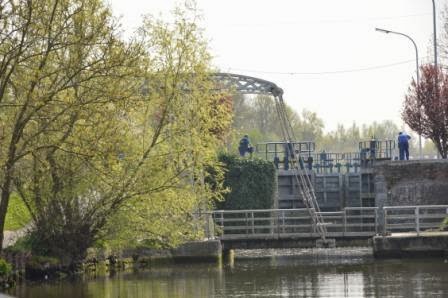 Lockkeepers at work
We were the first boat to cross past Aalst, and boy, did we find out we were.
All after-winter teething problems were presented to us. Lock doors that didn’t open or close completely and enormous amounts of rubbish collecting at each lock. 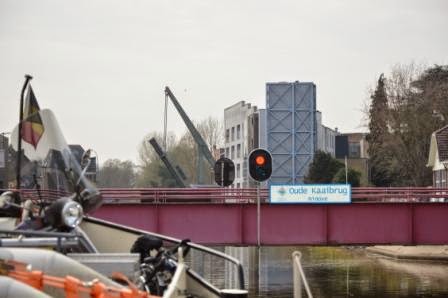 At Ninove we had to wait for a day and a half before they managed to open the bridge
After our mishap last year with the broken down bow thruster  we’ve become careful. So, slowly in or out of the lock and trying to shift the bigger detritus aside. 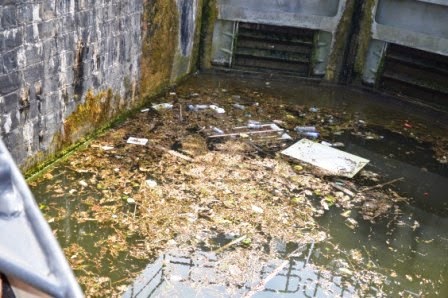 The rubbish in and around the locks is plentiful
Starting last year we carry a scooter on board, which we like as it enlarges our range compared to cycling.
But, alas, it can just happen that something breaks down just as you’re quite a distance away from the ship, having just been buying things.
Here is Michel pushing the scooter, the accelerator cable snapped, carrying a crate full of groceries at the back looking for a garage or such. I am walking behind carrying two big sacks of toilet paper (which you do need from time to time).
Luckily we found someone who could help us out, temporarily, by cutting the cable so Michel could manually operate it. That is how we got home and by now it has been fixed; so lucky this time. 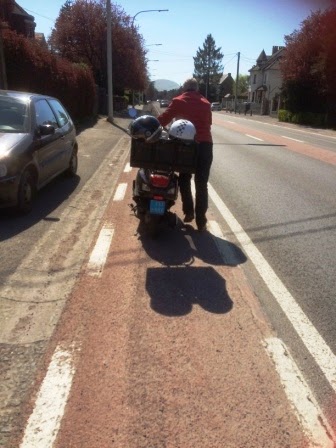 Michel doing the heavy work
One striking phenomenon – that has been striking as long as we are cruising – is that lock keepers are on the phone when opening or closing doors.
It makes no difference where or in which country, whether they are young students or older pro’s, they are on the phone all the time at each lock.
Sometimes you are accompanied by a two men crew that comes with you all day, which is necessary if you’re doing ten locks on one day, and at each lock they telephone. 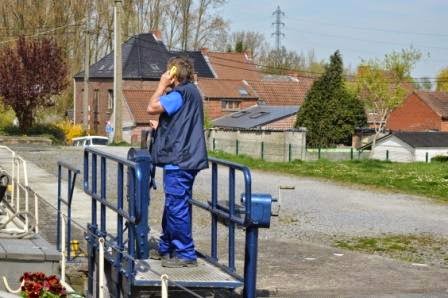 Would it be standing orders? 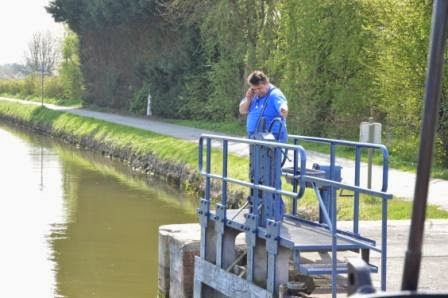 As we came off the Dender we had just a few hours to cruise to Antoing, our destination. We by now had a one day margin left on our original planning, so all right.
At the end of the day we reached the point where we had to do two more locks and half an hours cruising but, as we could spend the night there comfortably, we decided to postpone it till next day.
The lock keeper had switched the lights to green for us, but we informed her, thanking her, on the VHF that we would not go in and would pass the lock next day.
She thanked us for notifying her, whishing us a pleasant day and ‘till next time.
We were really flabbergasted when next day no lights showed on the lock and there was no response on the VHF.
We looked on the net if perhaps we missed another public holiday or some extra information, nothing.
There was one boat moored near us and the skipper told us that all public transport in Belgium was on strike, so the locks were too. They had just picked it up on the radio, not having a clue as to why and for how long. 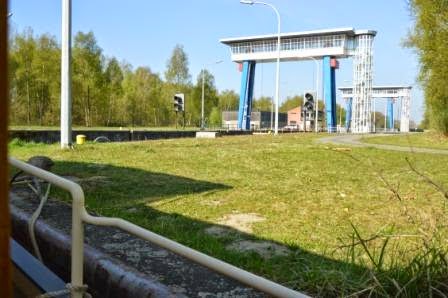 All lights at the lock are out
Luckily the strike was over next day and so we arrived in Antoing, having no margin left.
But, as said, it has happened before.
Meanwhile we have returned from Holland, the car has been returned to the hire company and tomorrow we carry on, crossing the border to France about which more in the next blog