And suddenly we were en route for two weeks already, about time to write the first blog for 2016.
After a busy winter on the quay in Amersfoort it’s nice to cruise again and to enjoy the outdoor life.
Below you’ll find the itinerary we planned for the 2016 cruising season. 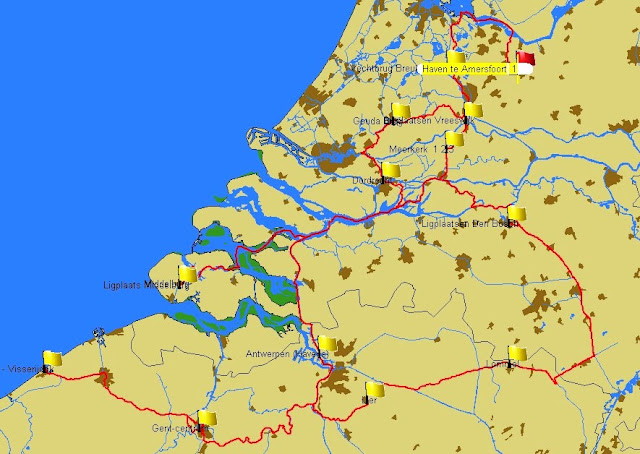 Like every year we had a busy social life, meeting friends and family; it is always a lot of catching up after the summer. And we enjoy the possibilities of going to a movie, having dinner in town and to easily do the shopping you need.
As always there had been a few highlights, some good some bad, part of the deal.
Positive were our sons engagement to his Stephanie and the birth of our second grandson, Quinten Michel. He is doing fine now after a difficult start.
And of course all our moments with the grandchildren are great.
We will miss them all during summer and we can already look forward to our winter activities.
It was soon obvious that we had left town. The nights are dark because there are no street lights, it’s very quiet ‘cause no brawlers and even the neighbours look quite different.
Just before we left Amersfoort we could enjoy The Passion (a spectacle where they perform the story using Dutch popsongs), performed this year in the Eem harbour, right in front of us.
It took a week to build the stage and everything, which caused the neighbours discomfort and noise, then an hour and a half performance and then again a few days to take it all down.
It gave us a few nice pictures though.
The day we left, our daughter Malka and her family accompanied us a while. Her being a proper sea scout she couldn’t resist to neatly put the lines away. Worth a picture, for we won’t see that again soon; I’ve never been a sea scout.
Via de Vecht we cruised to Vreeswijk at a leisurely pace. This June the ship has to be taken out of the water there for a regular check, Now we only went there to moor on the quay so the crane could lift our spud pole.
One of the last times we moored last year we noticed that the pole didn’t go down properly. We assumed that something was stuck down below, a stick or such and we further assumed that lifting the pole would set it straight so we would never know what it had been as it would drop in the water.
Alas, it wasn’t that simple; we did find a dent in the pole (quite a feat to get that) but smoothing it out and checking that the pole was dead straight were of no avail.
So we put the pole back and when in June we’re out of the water we can check the tube from underneath to find out what is causing all this. Until then it is an enigma.
This years cruising plans are not very extensive as we will spend part of the summer working on the ship, partly in dry dock, on the Museumwerf in Vreeswijk.
We will now cruise, via Den Bosch and the Belgian Kempen, to Ghent, where we have booked a mooring for a week and then we will continue to Ostend.
Like in 2012 and 2014 we are participants of the Ostend-at-Anchor festival, each time a feast.
After that we go back to Holland to attend a few important birthdays and then be dry docked at the end of June.
At the end of July we will participate in VreeswijkVolVooruit, another festival like Ostend but then in Vreeswijk. Never done that before but we think it will be fun.
The remaining time of the summer we will cruise around in the Netherlands, likely it will be in Zeeland, as we have not been there before with the boat, and the Hollandsche IJssel as it is such fun to cruise.
More about that in the next episodes, wishing everyone a good Spring and Summer with nice weather, so we will have that too. In any case, today was the first time we could open the roof.
We already made it to Meerkerk for the first time, a good spot to do some necessary chores.