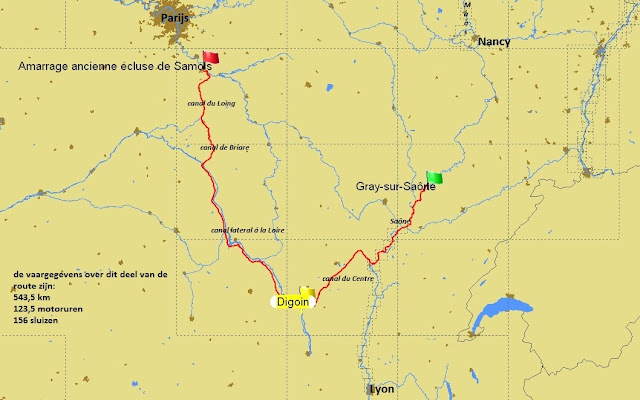 In the years prior to buying ‘t Majeur we once made the trip from Mulhouse to Dole with other people, we hired a boat on the Nivernais and were part-owners of a boat on which we also cruised the Nivernais.
Since then cruising these regions in middle France were high on our list.
For various reasons we have cruised other parts of France in the last few years, much to our pleasure. Last year we wanted to ‘do’ Burgundy but the broken down bow thruster prevented that.

So we were really looking forward to the moment we could go from the Seine into the Canal de Loing and we were more than happy making our first stop in Moret-sur-Loing, it was just what we hoped for (and expected).

After crowded Paris and cruising the Seine it was good to be on the calm canals and especially the small villages.

In many canals locks are automated or you’re provided with a remote control to operate the locks or you have to twist a pole, but here locks are still manually operated.

So, it’s plain politeness to help where possible and, as Michel is on the helm, this task befalls me; it is good exercise and always an opportunity for a chat with the lock keeper who does the other door so it’s improving my French.

Before one of the locks we had to wait a long time because it filled on the other side that had to be locked first.

It really took a while and we saw smoke emerging from the lock. We first thought it was a fire, but the photographer on the bridge kept his cool, alternatively taking pictures of what was happening in the lock and then of us.

The riddle was solved when the doors opened and three very small steamboats emerged. Billowing smoke and hooting they passed us, as interested in us as we were in them.

Although we never visit a church in Holland it’s become a custom of ours to make a tour around the church in French villages – by then you have seen most of the village as well – and to have a peek inside. 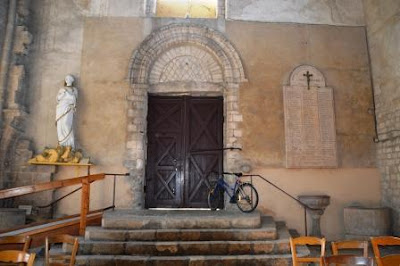 What was new after all these years was a bicycle in the church. The lady ministering the flowers wanted to make sure and knowing the Lord sees all, also when they take my bike, the least I can do to help him is by taking it inside.

On our route there are two monuments of interest, Rogny les sept écluses (Rogny of the seven locks) and the pont-canal de Briare, both on the world heritage list.
The seven locks of Rogny date from 4 centuries ago, connecting the Loire and the Seine. Two rivers, flowing in separate valleys, separated by a mountain ridge.
Thanks to this lock-staircase boats could muster a height difference of 25 meters. In 1604 a new design, 7 locks end-to-end with brick walls. It saved on doors (8 instead of 14), the locks could be shorter, the walls lower, so ‘easier’ to build, and the walls interconnecting made it sturdier.
When, in 1608, it was almost finished things took a turn for the worse: wars, vandalism, lack of funds, quarrels and what more so it wasn’t finished till 1635.
The locks worked until 1880, but by then they were too small for the standard boat sizes then in use, they needed too much water – more than available – so they were replaced by 6 locks in a diversion.

What remains are the stones – doors and so are long gone – in the middle of the fields as a beacon and symbol of yesteryears boating.

The second monument we were looking ahead to, still in use, was the pont Canal de Briare. Over the past years we have cruised many pont canals, but none as long (662 meters), as beautiful and as well known.
This pont canal – opened in 1896 – connects the banks of the river Loire, an enormous improvement for bargees who until then had to cross on the Loire itself, often dangerous, and – when currents and queues were against you – it could take up to 8 hours, to just to manage an 800 meter stretch from the one lock to the other.

And besides, it is a beautiful structure with pretty lampposts, and Gustave Eiffel was involved, in building the structure under the bridge and the lamposts and pillars on top.

Close to Briare is Gien, although situated on the Loire it is on a non navigable stretch, but within cycling distance.
They sell uncannily expensive earthenware and even in the hall, next to the factory where they sell out-of-date designs and B-choice, prices are staggering.
Thirty years ago it was less bad and I bought a set of tea cups; we were camping nearby then. I have visited here once or twice again over the years, but it was high on my list to go there again when barging.
We did, prices had gone up again and I restricted myself to replacing two broken teacups.

Not to be repeated, but it can be ticked off.

Cruising these canals you know that you can only go forward, turning is no option and the canals and rivers that you cross are not navigable.
So we knew for sure that we would meet the friends, that were skippering from the southern most point of the canal lateral à la Loire, going North. Neither of us could go elsewhere. So it was no surprise, but surely pleasant to meet before we both went our ways.
That is one of life’s nicer aspects, sometimes you know you’re going to meet people you know but often it is a coincidence.

But always a good reason for a get together before you’re on your way again and can possibly run into someone you know just around the corner, or meet no-one for weeks.


Past Briare the Canal runs alongside the Loire, sometimes close, sometimes a bit further away. The area between canal and river is a bit marshy, densely grown over and with lots of birds.
There are many trees along the canal which was nice as we could do with a bit of shadow, temperatures having risen considerably.

As of the beginning of July there was officially a heat wave, temperatures up to 350C (660F), and luckily on the water it bothers you less, but warm it was and it lasted for three weeks.

We were in the middle of the Loire region and here you can see lots of pretty castles and manors, pleasing to the eye, and then, as you turn a corner, you spot the cooling towers of a nuclear power plant, billowing water damp and not really an asset – to the landscape.

Shopping has to be done when you can, especially for the heavier stuff it’s nice if the shops are nearby. In this parts it is seldom a problem, there are shops aplenty, we have seen worse. DIY shops though are different, they are meant for visits by cars and preferably on the other side of town.

A bit bothersome, so if there is a DIY shop next to the canal we happily visit it. And having two spud poles makes mooring easy on a otherwise impossible mooring along a busy road.

In la Charité sur Loire there was but one mooring available, the loading bay of the grain silo which was no problem as there was no barge expected for a few days.

When I came back from a walk it just looked like we were being loaded; that’s how it must have looked like in the olden days when ‘t Majeur, then WUTA, was carrying pebbles between Maasbracht and Mechelen.

As we made a cycling tour near Nevers we spotted – from a vantage point – a nice looking stone pont canal, this one across the river Allier, a tributary of the Loire.

As we went across there appeared a canoe behind us with a Swiss couple. They had taken their foldable canoe to here by train, had come down the Allier and now they had schlepped their canoe up to the pont canal; they wanted to go to Nevers via the canal and then to the Loire, all their stuff in the canoe. Quite an enterprise but they loved it.


After the Canal latéral à la Loire we continued on the Canal du Centre, with open banks, warmer but with beautiful views. Meanwhile the farmers were eagerly working their land and all bales of hay had to be taken in.
Mostly they are those big round bales, but this farmer had square ones and seeing this coupled with seeing the tractor, heaving another bale on top of others, reminded me of how my kid brother used to play with toy cars and little blocks.

It was still very hot, the cows felt it too and you could see them lying under the trees in little groups of on their feet in the canal. This one cow had a pole position and looked for cooling underneath a tree, a one-cow-position and the rest on land.

From the Canal de Centre we moved onto the Saône, a very pretty, broad river. As nice as it had been to go from the Seine onto the canals, we loved going back to the wider waters, doing a bit more than 6 k/h and a real change of scenery.
And, nice mooring positions for to stay a few days.
And here again a pre-arranged meeting with other bargees, who coerced us to go swimming, like they did.

In the canals I had not taken to it but on  these wider waters it was lovely to take a refreshing dip several times a day.

Even Michel and Panache found swimming to be nice when it’s warm.

Meanwhile we cruised as far as Gray and from there – reversing – to Dole. From there it’s back to Gray and then further North, more about which in the next episode.

212 Comments on “Samois-sur-Seine to Gray”